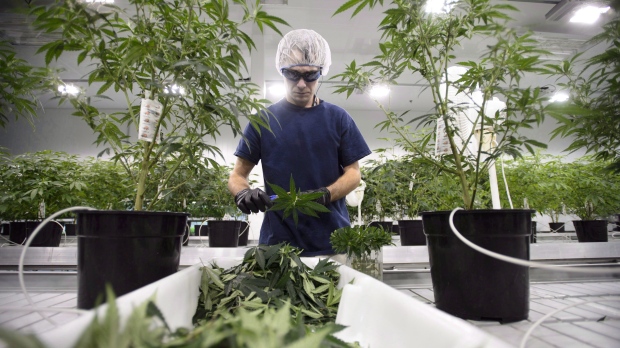 The FINANCIAL -- The Canadian business world is the playing ground for a new David and Goliath battle. Cannabis is the relatively small, upstart industry coming into the game, fresh off of its recent legalization of recreational use.

The alcohol industry serves as the perfect Goliath, with Canadian annual sales ringing in at $22-billion dollars a year. In comparison, Statistics Canada estimated the annual spending on cannabis was $5.7-billion dollars last year. With more Canadians indicating that they are willing to consume cannabis now that it’s legal, the question is whether alcohol sales over the holidays be impacted?

To answer this question, one needs to first examine the similarities and differences between alcohol and cannabis consumers. Ipsos research shows alcohol and marijuana users are very different, in many ways. The Ipsos’ Alcohol Consumption Tracker shows a wide range of income categories buying all forms of alcohol products (wine, beer, spirits).

However, the Ipsos’ Cannabis Consumption Tracker shows cannabis skews heavily towards the lower-income categories. 35 per cent of recreational and medical cannabis users have household incomes lower than $40,000 a year, compared to only 21 per cent of alcohol consumers.

How alcohol and cannabis is being consumed is another important characteristic which needs differentiating. Alcohol is largely a social product, consumed with family and friends at dinners, sporting events and special occasions. In fact, 77 per cent of alcohol consumption takes place at a social event. Here we see a striking difference, with 70 per cent of all cannabis consumption happening when people are alone.

The reality is that having a drink is a socially acceptable part of life. Cannabis does not enjoy this type of social acceptance. In fact, with the increased open use of cannabis, pot-shaming is happening more often. New Ipsos research shows 23 per cent have asked someone to refrain from smoking pot near them.

With these factors in mind, it seems there is little opportunity in the near-term for cannabis to eat into alcohol sales over the near-term holidays.

But there is a game-changer lurking around the corner in the form of cannabis edibles (and beverages). This is something the alcohol giants are very interested in, as they are flanking their positions against the potential impact cannabis could have on their business through strategic investments in Canada’s leading cannabis companies. Just a few months ago, Constellation Brand’s made a $5-billion investment in Canopy Growth. Meanwhile, Molson Coors formed a joint venture with Quebec-based Hydropothecary Corporation.

These companies have likely done their homework by checking the data from states in the U.S. where marijuana was legalized (and edibles/beverages are also legal). Academic studies using data collected over 10 years suggests that cannabis has caused a 15-per-cent drop in alcohol sales.

In a proactive measure, big alcohol companies are looking to create new cannabis edible and drinkable products. The assumption is that cannabis can provide a substitutable psychoactive experience to being intoxicated by alcohol, yet can do so with significant advantages over alcohol.

Multiple interviews with Bruce Linton, Canopy Growth’s CEO, suggests their yet-to-be-released cannabis beverage products will have zero calories, carry no hangover into the morning, yet leave you feeling giddy. Who wouldn’t want zero calories and no hang-over after their holiday festivities?

Unfortunately for the cannabis companies (and some consumers), we are still a year away from the launch of these new cannabis-infused beverages and edibles because they are not expected to be legal until October 2019. So while the 2018 holiday season’s alcohol sales may be spared, 2019’s sales might not be spared in the same way.

One thing we do know at this time is that our David has a lot of obstacles in its path to defeat Goliath. In order for the cannabis industry to eat into alcohol profits, it will have to create a product which tastes good, eliminates the stigma associated with usage and creates opportunities for it to be consumed on social occasions such as parties, sporting events and meals. David will certainly need to be savvy, creative and opportunistic to defeat Goliath.