Is the World Better for Gay People Than It Was 10 Years Ago?

by The FINANCIAL
in America, WORLD
0

Azerbaijan legalized homosexual activity in 2000, but the former Soviet country was still ranked the worst in Europe for gay people in a 2016 survey. (file photo)

How to get a copy of a divorce decree or certificate

Get copies of vital records and ID cards

Half of the world’s adults (50%) now say their city or area is a “good place” for gay or lesbian people to live — a figure that has doubled over the past decade and represents a new high in Gallup World Poll’s trend dating back to 2005.

The latest figure, based on surveys in 110 countries and areas in 2021, reaffirms several other global studies that show acceptance appears to be growing across the world. But the data also reveal a significant remaining divide. About four in 10 people worldwide say their area is “not a good place” for gay and lesbian people, while 12% do not know.

When the Gallup World Poll first asked this question in 2005, about one in five people across the world (21%) described their city or area as a good place for gay people to live. Between 2014 and 2019, this figure had grown to roughly one in three adults, ranging from 31% to 38%. This figure increased markedly in 2020, to 49% — statistically similar to the latest reading, 50%, recorded in 2021. 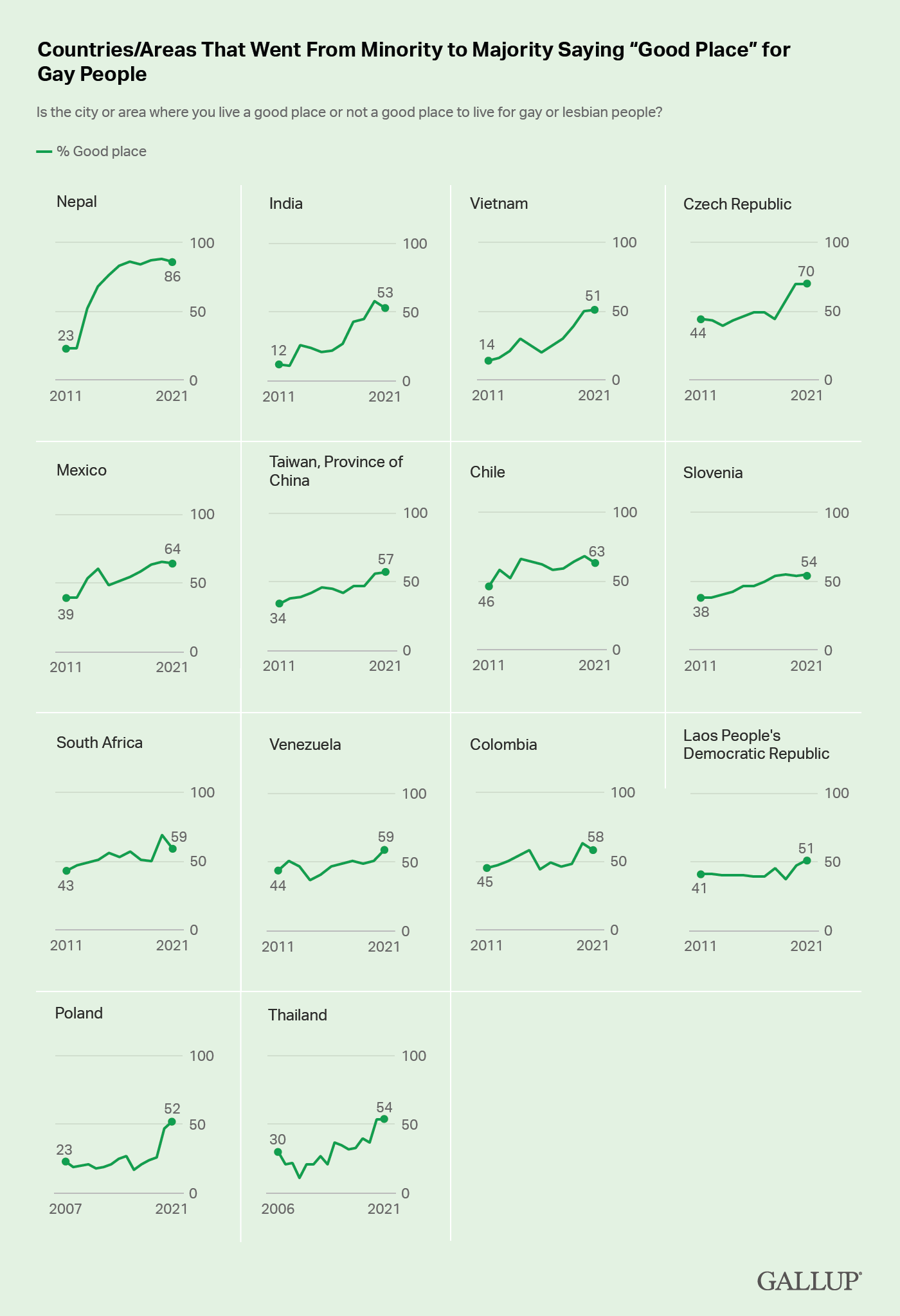 Small multiple line graphs showing trends in the percentages of residents of 14 countries who say their area is a good place for gay or lesbian people to live. In 2021, most residents in Nepal, India, Vietnam, the Czech Republic, Mexico, Taiwan, Chile, Slovenia, South Africa, Venezuela, Colombia, Laos People’s Democratic Republic, Poland and Thailand said that their city or area is a good place for gay people to live.

The starkest change over this period took place in Nepal, where perceptions of communities as good places for gay people to live nearly quadrupled, from 23% saying their area was a good place in 2011 to 86% in 2021. These changes may be related to a series of court decisions and government actions on LGBT issues, including adding LGBT protections to its constitution. Nepal now ranks among the countries with the highest percentages of people saying their communities are good places for gay people to live.

In India, too, perceptions have undergone a sea change: In 2011, 12% of Indians said their city or area was a good place for gay people, whereas now a majority (53%) say this about their area. Like Nepal, court decisions in India have changed the legal landscape for LGBT Indians — including a 2018 decision that decriminalized homosexuality. Courts there have stopped short of legalizing same-sex marriage, however.

Along with Nepal and India, small majorities in Asian locales such as Taiwan (57%), Thailand (54%) and Vietnam (51%) now say their area is a good place for gay people to live — and each of these has seen these figures increase by more than 20 points since 2011. A smaller 10-point increase in Laos made this the prevailing attitude among the majority of the population (51%).

In Eastern Europe, majorities in the Czech Republic (70%), Slovenia (54%) and Poland (52%) now say their areas are a good place for gay people, each representing double-digit increases compared with 2011.

Similar increases have taken place in Latin American countries of Mexico (64%), Chile (63%), Venezuela (59%) and Colombia (58%) — all of which went from minorities to majorities saying their areas are a good place for gay people to live.

Residents in two countries have become less likely to say their city or area is a good place for gay people over the past decade. In 2011, Gallup World Poll found that the majority of people in Nicaragua (54%) and Paraguay (56%) said their area was a good place for gay people to live. But in both countries, double-digit decreases over the past decade have resulted in minorities of residents expressing these opinions.

In Nicaragua, President Daniel Ortega has cracked down on demonstrators broadly, including LGBT activists, and has sought to shut down LGBT organizations. Meanwhile, in Paraguay, a conservative political wave has led to policy changes in education, and two consecutive presidents have opposed efforts at legalizing same-sex marriage.

Outside of Europe, other Western nations also rank among the highest in the world in terms of perceiving their communities as good places for gay people, including Canada (87%), Australia (86%), New Zealand (85%) and the U.S. (80%).

Nonwestern nations are also represented among the countries most likely to say their area is a good place for gay people as well — including Nepal (86%), a new addition to the list, and Uruguay (82%).

The countries where residents are least likely to say their area is a good place for gay and lesbian people to live, with fewer than one in 10 saying this, are largely clustered in Africa, including Malawi (3%), Senegal (3%), Ghana (7%), Zambia (7%), Burkina Faso (8%) and Nigeria (9%). Nearly half of the countries in the world where homosexuality is outlawed are in Africa.

Post-Soviet Eurasian states such as Armenia (4%), Kazakhstan (4%), Kyrgyzstan (6%) and Georgia (9%) are also home to many of the countries where people are the least likely to say their communities are good places for gay people to live.

The trajectories in Nepal and India show how quickly social change can occur, and how attitudes can transform on a national scale over the course of a decade. In the U.S., for example, support for same-sex marriage reached the majority level for the first time in 2011, and consensus on the issue has continued to build since.

Attitudes can also turn the other way, however — with Nicaragua and Paraguay providing examples of places majorities once viewed as good places for gay and lesbian people, but that have since become less likely to feel this way.

Gallup is sometimes unable to ask this question in some countries because of the sensitive nature of the question. In 2021, this question was not asked in 12 countries.

The COVID-19 pandemic severely disrupted people’s mobility worldwide, but it didn’t stop them from wanting to move. In fact, Gallup...

How to get a copy of a divorce decree or certificate

Get copies of vital records and ID cards