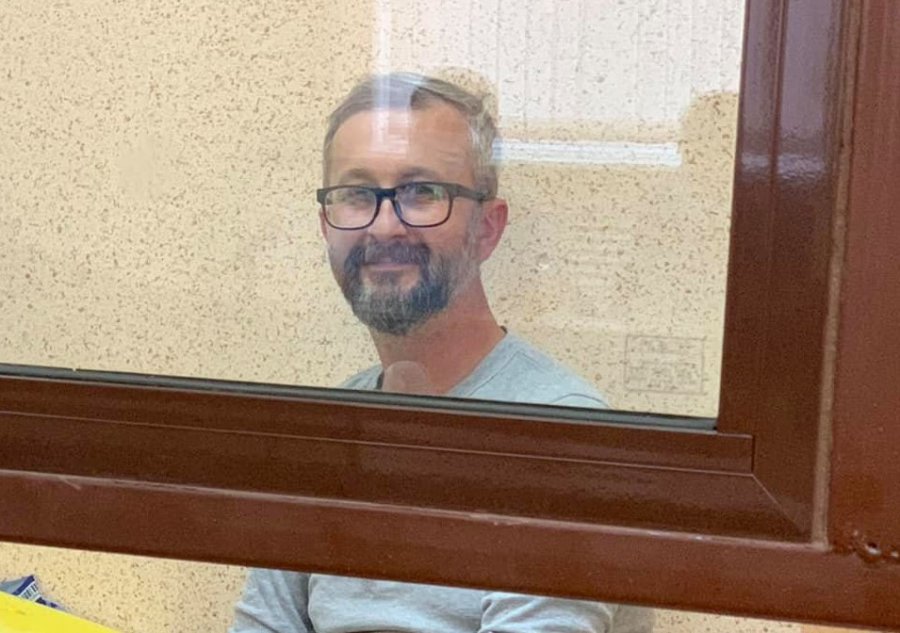 The only ‘evidence’ for the grotesque ‘sabotage’ claims against Crimean Tatar journalist and public figure, Nariman Dzhelyal and two cousins, Asan and Aziz Akhtemov, has come from three secret ‘witnesses’.  Since both cousins retracted their ‘confessions’ once they were finally allowed to see independent lawyers, and they and two other Crimean Tatars have given similar accounts of the torture they were subjected to,  there are no grounds for trusting such anonymous ‘testimony’.

Dzhelyal and the Akhtemovs, together with their lawyers, have been familiarizing themselves with the case material.  In a statement released on 18 January, Dzhelyal wrote that this material provides more confirmation that he is facing persecution as a journalist and public figure for freely expressing his views, for his professional activities and for defending the interests of Ukrainian citizens in Crimea.  There is no direct and objective evidence to back the charges,  and the investigators present only suppositions, without any proof, regarding intent and motives.

“The charges are based on the testimony of three anonymous witnesses who, in some miraculous manner, ‘saw’ and ‘heard’ exactly what the investigators required.

It is clear that the prosecution will not bother to try to prove the guilt of the defendants in this political case since the court standardly passes the pre-written sentence.

Nonetheless, my lawyers and I am planning serious resistance, in order to yet again expose the cynicism, baseness and dishonesty of the Russian system of repression.

I call on all free people in occupied Crimea, regardless of the political repression, unlawful arrests; fines and torture, as in the case of Nariman Ametov, to uphold the principles and methods of non-violent resistance.

Justice will prevail over force!”

Nariman Ametov is one of two Crimean Tatars, together with Kurtumer Chalgozov, who have had the courage to publicly reveal the torture and threats used to force them to ‘cooperate’ with the Russian FSB.  It has, in fact, seemed extremely likely from the outset that such methods were being applied. It is possible that the brazen manner in which the FSB are seizing and then releasing men is deliberate, aimed at trying to sow distrust.

Five Crimean Tatars were seized after armed raids on 3 and 4 September 2021.  Eldar Odamanov disappeared after the FSB appeared at his home, early on 3 September.  Then, during the following night, armed raids were carried out of the homes of Asan and Aziz Akhtemov, and of Shevket Useinov.  They came for Nariman Dzhelyal in the morning of 4 September.

It was clear that Dzhelyal was the target, and that the timing was no accident.  Dzhelyal, the highest-ranking leader of the Crimean Tatar Mejlis (or representative assembly) in occupied Crimea, was in Kyiv on 23 August, the day of the supposed ‘sabotage attack’.  He was meeting there with high-ranking representatives of 45 democratic states participating in the Crimea Platform inauguration meeting, and had returned to Crimea despite serious fears that Russia would carry out reprisals for his participation in this international initiative.

All of the men disappeared, with the Akhtemovs held incommunicado for almost ten days and only provided with access to lawyers after the European Court of Human Rights intervened.  During that period both Asan and Aziz Akhtemov gave videoed ‘confessions’ which they retracted, as extracted through torture, as soon as they were allowed access to real lawyers.

After being effectively abducted, and held incommunicado for three days, the other two men, Odamanov and Useinov, were jailed for 10 and 15 days on absurd charges, quite unrelated to the armed raids on their homes.

As reported, there are serious grounds for doubting that the minor damage caused to a gas pipe in Perevalne on 23 August was even an act of sabotage, and none for the charges against Dzhelyal and the Akhtemovs.

On 8 November, an additional charge was added, of smuggling an explosive device, as part of an organized group (Article 226.1 § 1, carrying a sentence of from 7 to 12 years’ imprisonment).

On 15 December, Polozov reported that the ‘investigation’ was complete and that the final charges had been formally laid against Dzhelyal.  As well as the above-mentioned, the FSB has now added ‘causing considerable material damage to the Crimean gas network (to the tune of around 1,425 USD).  Polozov says they are also claiming that (the alleged) cut in gas to the military unit that supposedly ensued constituted “an attack on the Russian Federation’s defence capabilities”.  Polozov noted that the indictment was reminiscent of the material used during Stalin’s Terror.

There has been wide international condemnation of this appalling case from, among others, the United States; the European Union; the Parliamentary Assembly of the Council of Europe and Human Rights Watch.

Top 3 Things You Should Do to Make Your Website Successful

Ukraine “appears to have won the Battle of Kharkiv”