The FINANCIAL - How prepared is the US to respond to COVID-19 relative to other countries?

How prepared is the US to respond to COVID-19 relative to other countries?
Share This

The ongoing novel coronavirus pandemic has already overwhelmed the health systems of several countries and is projected to overburden the health system in the United States. A surge in patients with the new coronavirus disease (COVID-19) would challenge the ability of the U.S. healthcare system to treat all patients, including those in need of care for other conditions.

The following charts highlight available cross-national data on the healthcare workforce, hospital resources, and at-risk populations in select countries. Additional charts explore coverage and affordability barriers that may limit access to care or cause serious financial burden for those needing COVID-19 treatment. Where data are available, we compare the U.S. to countries that are similarly large and wealthy (Australia, Austria, Belgium, Canada, France, Germany, Japan, the Netherlands, Sweden, Switzerland, the United Kingdom) as well as other countries that have a large number of patients with COVID-19 (China, Italy, Iran, South Korea, and Spain).

Visit the Health System Dashboard to explore additional indicators of health spending, quality of care, access to care, and health outcomes in the U.S. and comparable countries.

The healthcare workforce includes clinicians and providers as well as staff who maintain operations of facilities and patient flow. Healthcare workers have a high risk of contracting COVID-19 given their constant exposure to people infected with the virus. The healthcare system can become further strained when medical providers and staff contract the virus, not only adding to the patient load, but also reducing provider capacity to care for patients.

The U.S. has fewer practicing physicians per capita (2.6 per 1,000 people) than most other similarly large and wealthy countries. The U.S. also has fewer physicians per 1,000 people than Italy (4.0) and Spain (3.9), both of which have already seen their workforce overwhelmed by the COVID-19 crisis. Italy has experienced the largest outbreak outside of China, and Spain follows the U.S. in the number of confirmed patients with COVID-19. 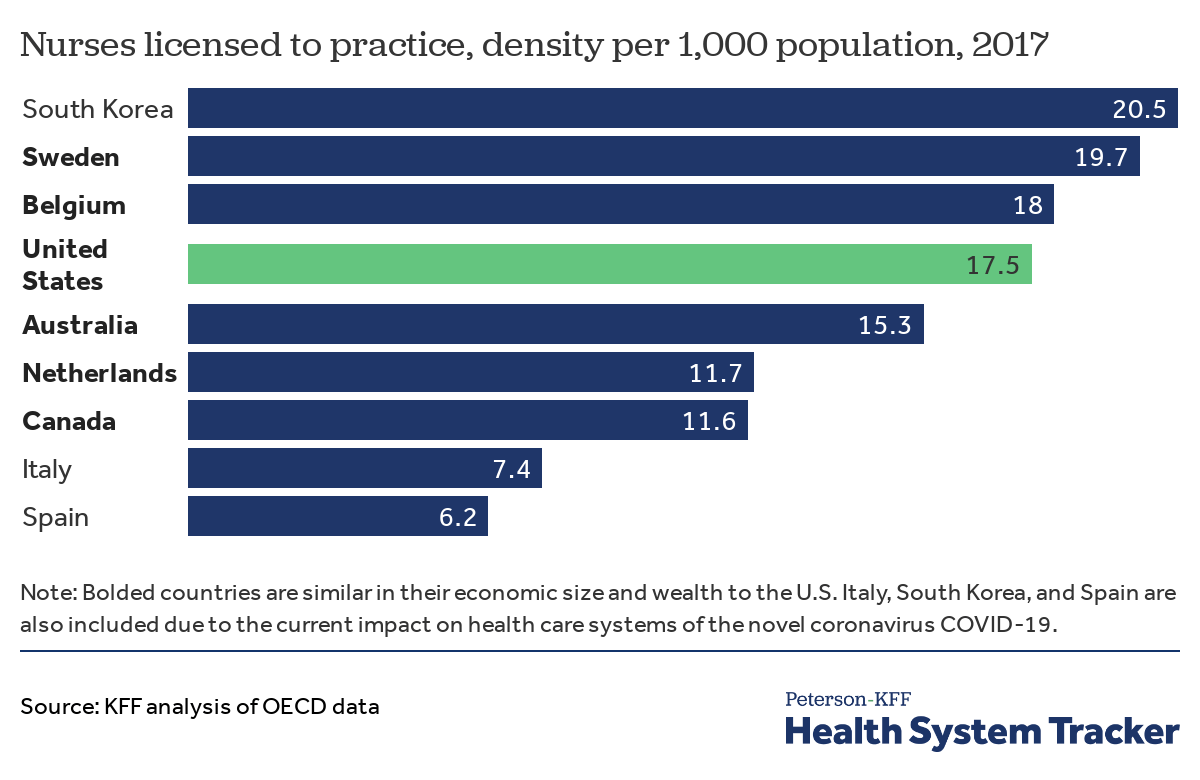 U.S. hospitals have more employees than most comparable countries, but many are administrative 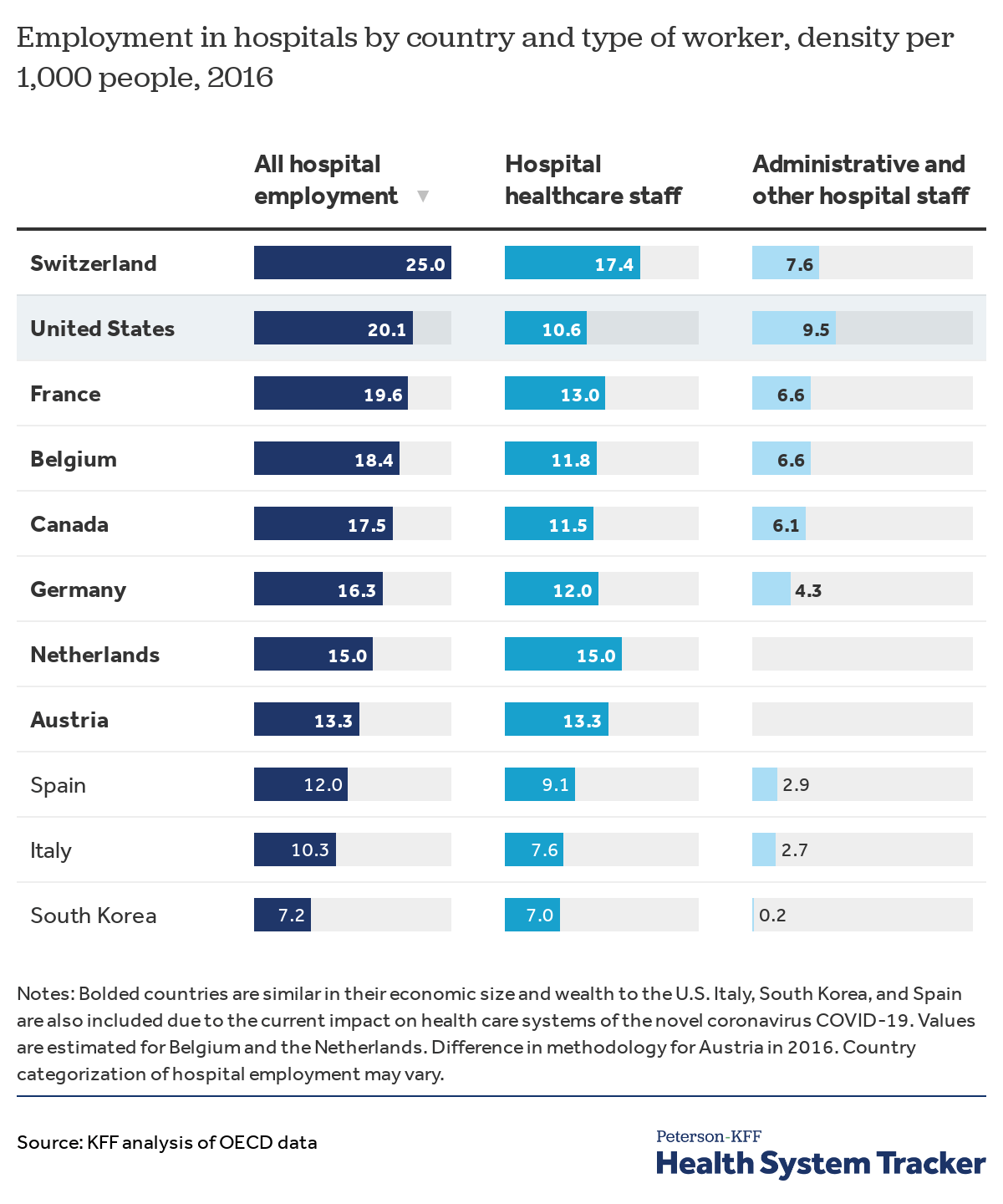 Hospital staff include workers who deliver direct care as well as administrative and support staff. The U.S. has more hospital employees (20.1 per 1,000 people) than most comparable countries and other countries heavily affected by the pandemic. However, relative to comparable countries, the U.S. has fewer hospital staff who deliver direct patient care, with 10.6 hospital-based healthcare workers per 1,000 people. In contrast, Italy, South Korea, and Spain have fewer healthcare workers in hospitals compared to the U.S. Nearly half of the U.S. hospital workforce consists of non-clinical staff such as administrative, operations, and medical billing personnel.

The U.S. has less hospital-employed physicians per 1,000 people than most comparable countries

The number of hospitals and hospital beds and the availability of medical technology are important factors to consider in assessing how prepared the U.S. is to address the coronavirus pandemic.

The U.S. has fewer total hospital beds per person than similar countries 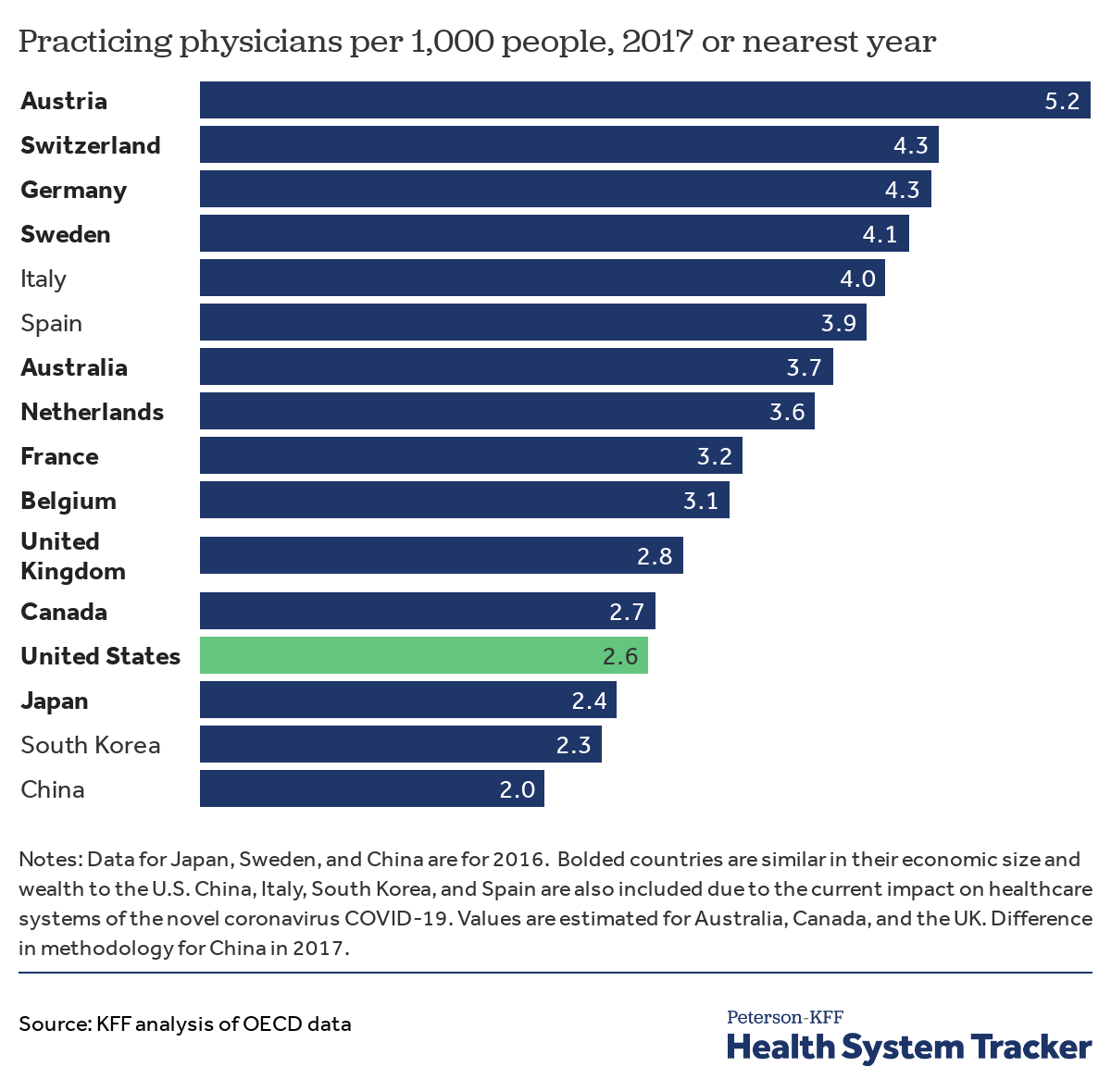 During the evolving global pandemic, health systems in many regions will see a surge in visits to emergency rooms. The availability of hospital beds can ultimately limit a health system’s ability to treat patients needing care. If there are more severely sick patients than there are beds, providers may need to decrease the number of days individuals spend in hospitals or turn away patients who would otherwise be admitted.

Experience from Italy and China shows that the outbreak can strain intensive care capacity and the availability of ventilators. Recent cross-country data on intensive care unit (ICU) capacity is not available; several older studies suggest the U.S. may have more ICU beds per person than many other countries.

The use of computed tomography (CT) scans may be indicated for certain patients with COVID-19; however, the CDC does not recommend CT scans for diagnosis of COVID-19 over viral testing. China incorporated CT scans in screening for the disease following a shortage in testing kits. Among comparable countries for which data are available, South Korea has the most CT scanners in hospitals (29.0) per million people. The U.S. and Italy have a similar number of scanners in hospitals (27.1 and 25.2 per one million people, respectively). 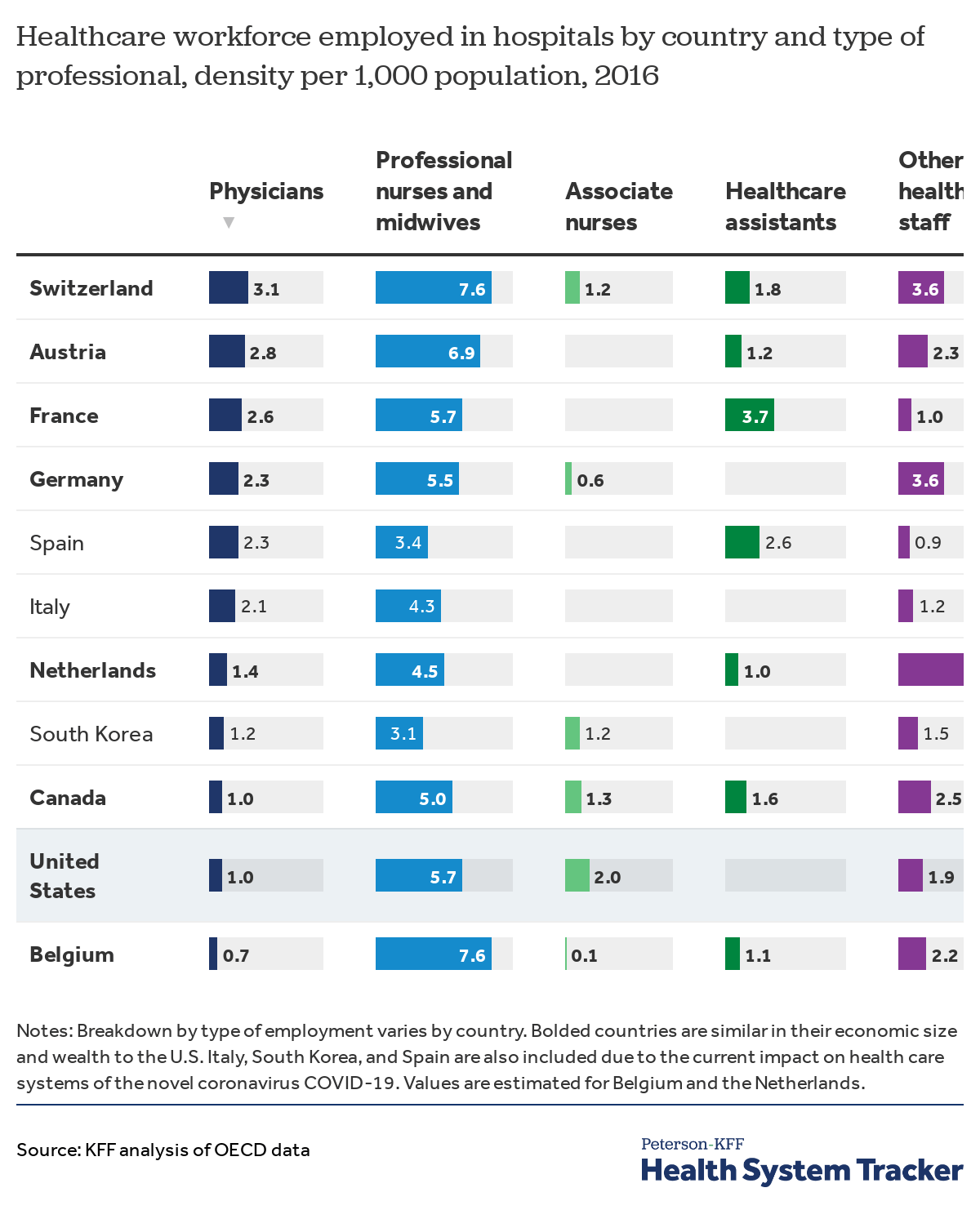 Recent legislation makes the cost of the novel coronavirus test free, however the cost of treatment could be high, particularly for people admitted to the hospital. Some states have waived treatment costs for patients in state-regulated plans.

The U.S. is an outlier among comparable countries when it comes to the share of the population with insurance coverage

People who are uninsured are likely to face significant barriers to accessing testing and treatment for COVID-19. More than a quarter (28.5%) of uninsured adults reported delaying or going without needed care due to concerns over cost in 2018. Nearly 1 in 10 Americans (9.4%) were uninsured in 2018. Among comparably wealthy countries and Italy, South Korea, and Spain, the U.S. is the only country that does not provide universal or nearly universal health coverage. Because health insurance is often tied to employment in the U.S., it is possible the uninsured rate will rise as more workers become unemployed.

Adults in the U.S. have higher out-of-pocket expenses on average than adults in most comparable countries

On average, Americans incurred $1,125 in out-of-pocket expenses for healthcare in 2018, higher than the average in countries that have been severely impacted by COVID-19 or are similarly wealthy, with the exception of Switzerland. A recent KFF analysis estimated that out-of-pocket expenses for COVID-19 hospitalization could exceed $1,300 for individuals with employer-based insurance, which is typically more generous than insurance obtained through the individual or small group market. 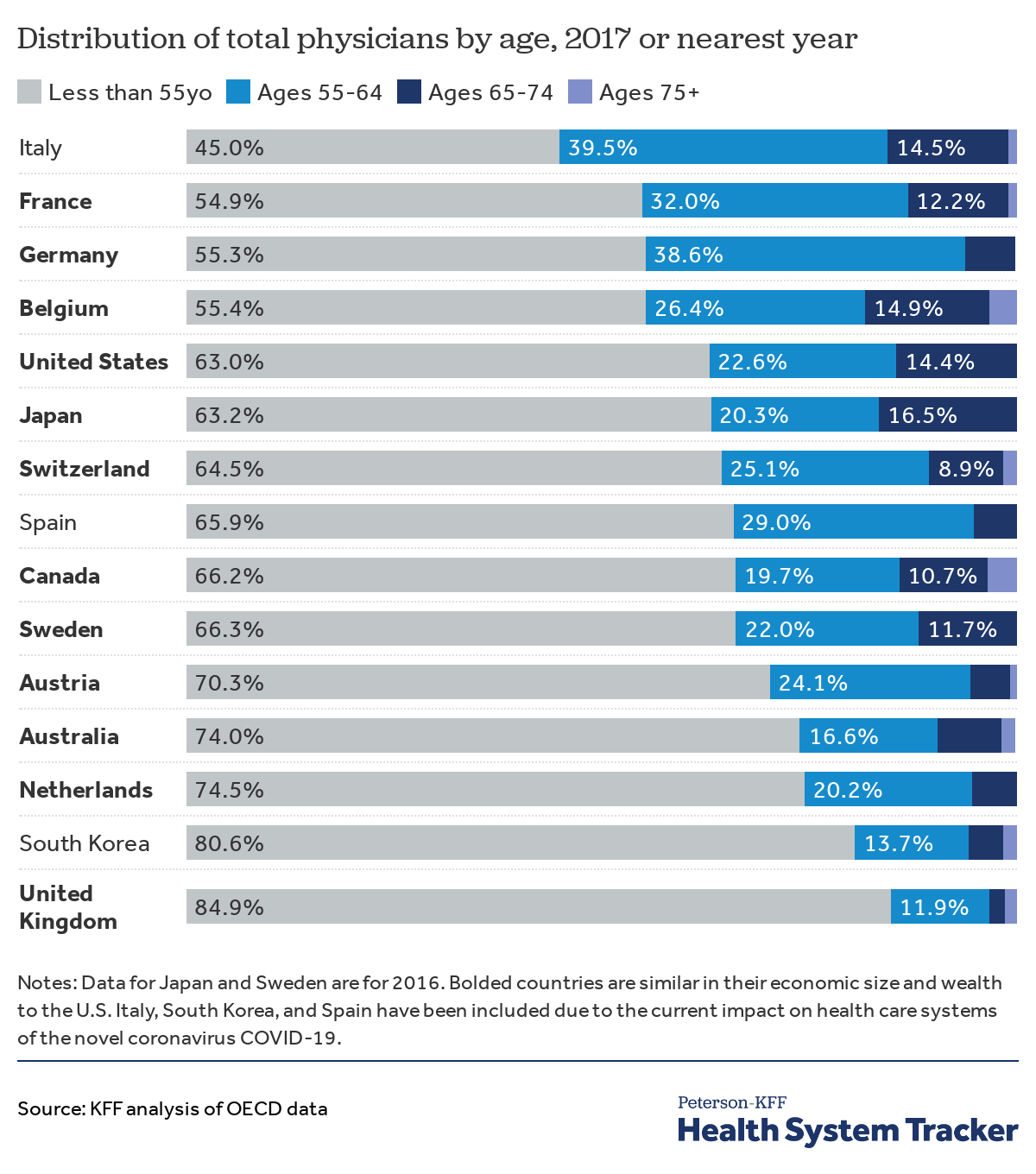 According to the results from a 2016 international survey conducted by the Commonwealth Fund, adults in the U.S. were more likely to report cost-related barriers to care. The results of the survey, as well as U.S. national survey data, indicate that adults in worse health delay medical care because of costs more often than their healthier counterparts. Cost-related barriers to accessing care for people with underlying health conditions could exacerbate the severity of the outbreak within the U.S., since certain underlying conditions are associated with more severe COVID-19 outcomes.

KFF analysis has found that over 100 million U.S. adults are at an increased risk of serious illness if they contract COVID-19, due to either older age or an underlying medical condition. The following charts consider the share of people at risk due to age in the U.S. and other countries, as well as disease burden due to some conditions associated with serious COVID-19 outcomes — including heart disease, diabetes, and chronic respiratory diseases.

Population age distribution may factor into the severity of the COVID-19 outbreak from one country to another. In the U.S., 16.0% of the population is 65 and older. This share is higher in other comparably large and wealthy countries. The share of people who are 65 and older is 22.7% in Italy, 19.3% in Spain, 14.3% in South Korea, and 11.2% in China.

Adults in the U.S. are more likely than adults in most comparable countries to die from conditions linked with severe outcomes from COVID-19 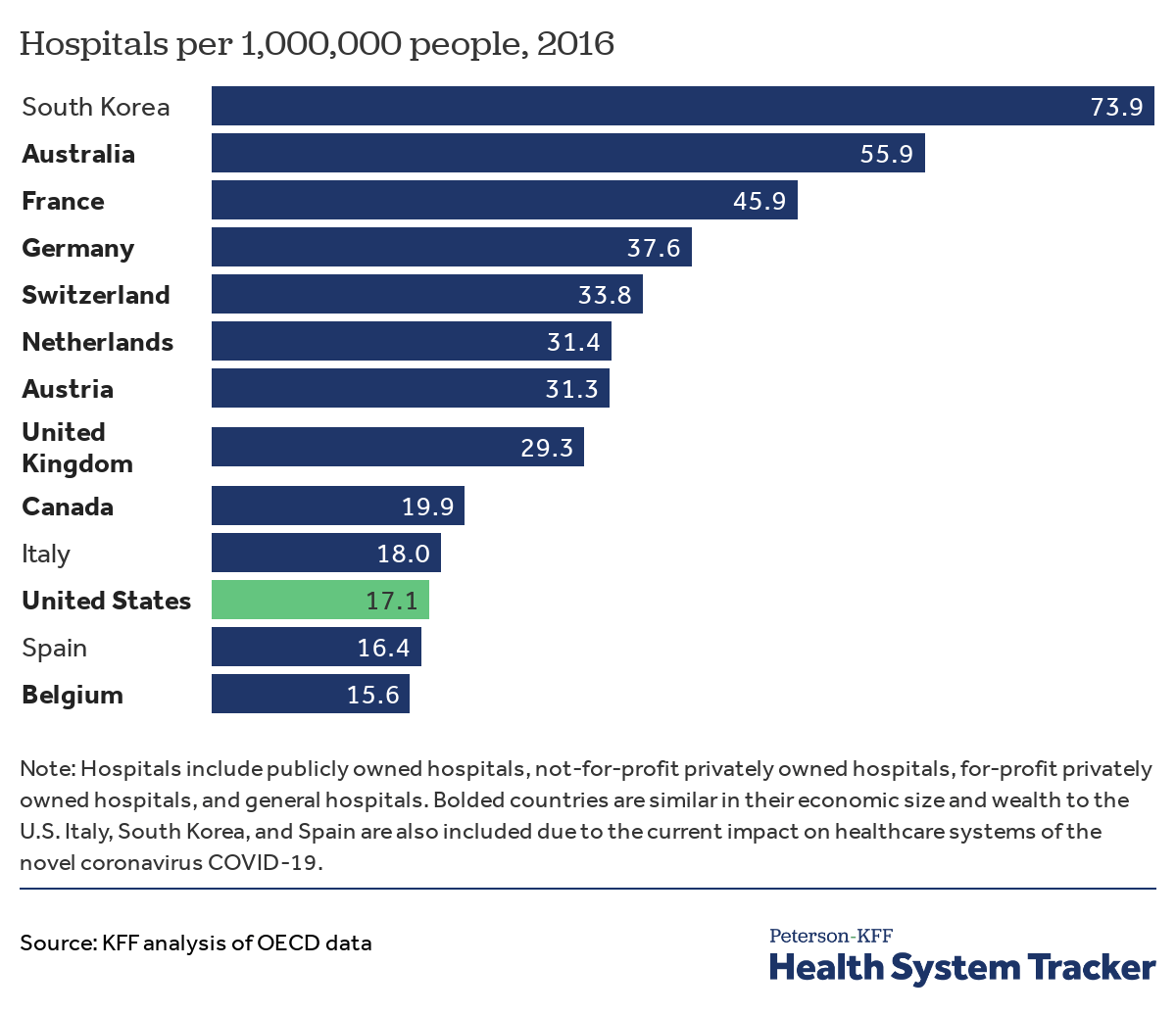 The probability that an individual between the ages of 30 and 70 dies from cardiovascular disease, chronic respiratory disease, diabetes, or cancer is higher in the U.S. (14.6%) than comparably large and wealthy countries. Individuals with severe, chronic medical conditions such as heart disease, respiratory diseases, and weakened immune systems are at a higher risk for more severe COVID-19 symptoms.

Disease burden is relatively high in the U.S. for some health conditions, increasing the risk of presenting with more severe COVID-19 symptoms

Disease burden is measured in “disability adjusted life years” (DALYs), which account for both the length and quality of life. Certain countries dealing with severe outbreaks of COVID-19 have relatively high rates of disease burden attributable to some chronic illnesses.

Compared to similarly wealthy and other affected countries, the U.S. has relatively high rates of DALYs attributable to some of the health conditions that put people at high risk of severe COVID-19: cardiovascular diseases, chronic respiratory diseases, and diabetes.

In countries where disease burden for high-risk conditions is high, more people may be at risk of severe complications from COVID-19. The long-term effects of COVID-19 are currently unknown, but disease burden may increase in all countries as more people contract and recover from the virus.

The authors would like to thank Julie Hudman, PhD, MPP and Dustin Cotliar, MD, MPH for their contributions.