The winter of 2020/21 overall has been wet and dull with near average temperature.

Interestingly we have seen the highest and lowest temperatures of the winter season in February. Cold conditions from the east brought low temperatures down to the lowest of -23.0°C at Braemar (Aberdeenshire) on 11 February followed by a southerly flow bringing warm weather from the Canaries and Africa leading to the season’s highest temperature of 18.4 °C at Santon Downham (Suffolk) on 24 February.

Dr Mark McCarthy is the head of the Met Office National Climate Information Centre. He said: “February 2021 has seen a wide temperature range resulting from the two predominant weather patterns we’ve seen this month, with the first half of February experiencing some bitterly cold easterlies originating from Russia, and recent days seeing the influence of air coming from the Canary Islands.

“Minimum temperatures of below -20 were more frequent historically, but have become scarcer, while winter temperatures above 18.0 C have become a little more regular, with four of the last five winters recording such events. Historically they were extremely infrequent events.

“Our winters are changing and as we have seen we can still receive cold snaps; it’s just that those extremes won’t be quite as cold or as frequent as they once would have been.”

An event known as a Sudden Stratospheric Warming (SSW) occured in January and this played a significant role in influencing our weather through late winter. You can find out more about a sudden stratospheric warming (SSW) from our blog which explains the weather patterns behind the cold easterlies.

The first half of February was generally cold with a brisk easterly flow bringing bitter winds. An unsettled spell led to some eastern locations exceeding their February long-term average rainfall within the first week. The cold weather brought snow showers, especially on the eastern side of the country with depths exceeding 30 cm in a few places, and when the winds subsided there were some particularly cold nights. Braemar in Scotland got down to -23.0 °C on the morning of 11 February, the UK’s lowest temperature since 1995 and the lowest in February since 1955. From the middle of the month, milder air spread eastwards to all parts allowing temperatures to get into double figures in most areas with the highest recorded day-time temperature of 18.4°C in Santon Downham on 24 February.

Scotland and Northern Ireland have come close to expectations for sunshine during the season, and the far north of the Scottish mainland, and Shetland have had a much sunnier winter than average with Shetland reaching 154% of average (130.9 hours), but due to its northerly location that is still fewer total hours than much of the rest of the UK. 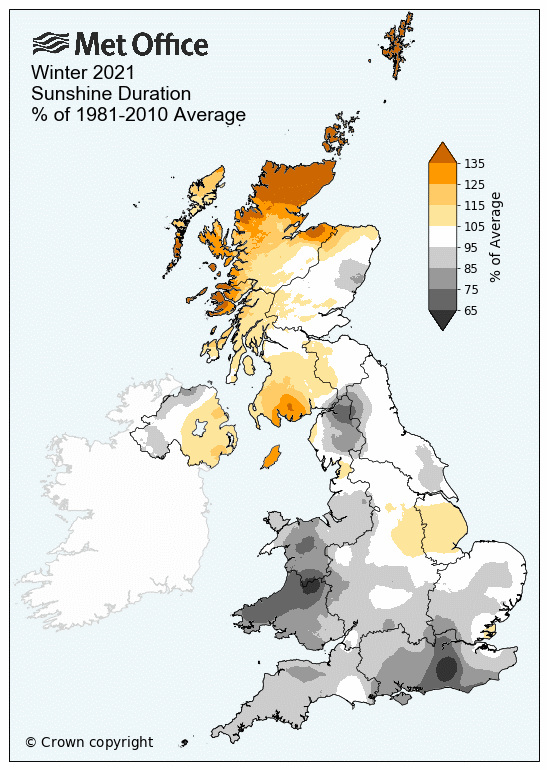 Despite the difference in extreme temperatures, the winter as a whole has not been far from its average mean temperature. Wales was the warmest, recording a mean temperature of 0.06°C above average for the season as a whole, and Scotland the lowest at -0.57°C below average.

See also  Incorporated companies in the UK July to September 2021

The UK felt the effects of a few storms during the season. Storm Bella arrived on Boxing Day bringing strong winds and heavy rain to the UK on 26 and 27 December. An Amber weather warning was issued for parts of south Wales and across southern England and a Yellow warning for wind for the whole of England, Wales and Southern Scotland. A peak wind gust of 106 mph was recorded at Needles (Isle of Wight).

Storm Christoph brought persistent and heavy rain from 19 – 21 January leading to widespread flooding and snow to parts of the UK. Several severe weather warnings were issued to cover the system and Manchester and South Yorkshire declared major incidents due to the flooding risks. Colder air swept in again in the wake of Storm Christoph, bringing snow to some areas and widespread frosts.

Protected: 5 Signs You Need To Hack Your Teen’s Phone

Taking a closer look at cryptocurrency

Navigating holidays in a pandemic, again

Do you need a COVID-19 booster shot?

Giving thanks can keep marriages going

Celebrating Compliance, Ethics and Culture, as a vital part of company performance

“eSIM is considered a novelty not only in Georgia but…

“We created the resolution framework to promote risk management culture…

Raising healthy, educated, moral, successful children with a sense of…

“Helping to reduce the environmental impacts of our products and…

Protected: 5 Signs You Need To Hack Your Teen’s Phone

Taking a closer look at cryptocurrency

Incorporated companies in the UK July to September 2021