by The FINANCIAL
in Travel Biz, Travel News
0

The latest data from ForwardKeys reveals that Russian outbound tourism, already severely handicapped by pandemic travel restrictions, has fallen even further, because of Russia’s military operations in Ukraine. In the week before the outbreak of war (w/c 18th Feb), outbound international air tickets from Russia stood at 42% of pre-pandemic levels; but in the week immediately after the invasion (w/c 25th Feb), issued air tickets fell to just 19%. Since then, flight bookings have sunk deeper still and have been hovering at around 15%.

Owing to war-related sanctions on civil aviation, Russians cannot book flights to many of their favourite destinations in the West; so, they are instead booking trips to the Middle East and Asia. An analysis of flight bookings made between 24th February, the start of the invasion, and 27th April, the latest data, reveals that the top five destinations for travel between May and August, in order of resilience, are Sri Lanka, the Maldives, Kyrgyzstan, Turkey and the UAE. Bookings to Sri Lanka are currently 85% ahead of pre-pandemic levels, to the Maldives 1% behind, to Kyrgyzstan 11% behind, to Turkey 36% behind and to the UAE, 49% behind. However, Sri Lanka’s position at the head of the list is not a true reflection of the island’s attractiveness as a destination. Instead, it is a consequence of terrorist bombings, which scared away visitors in 2019, the pre-pandemic benchmark year. 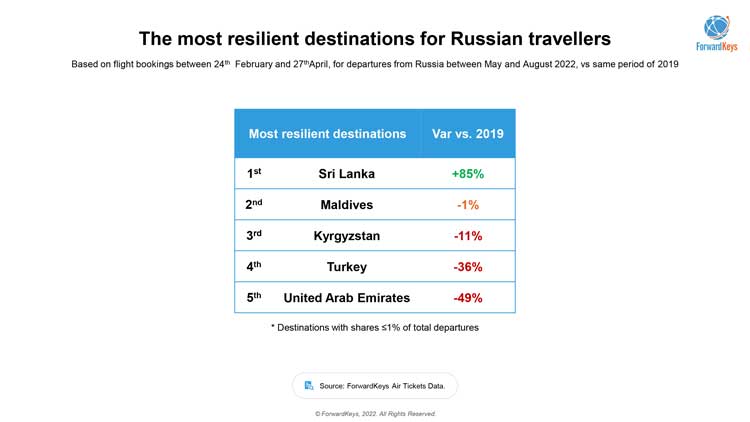 Further analysis of the recent tickets booked to Turkey and the UAE suggests that a very substantial proportion are affluent Russians going on holiday. This is because the number of seats sold in premium cabins has tripled, compared to 2019, and the average trip duration for premium travellers is 12 nights in Turkey and 7 nights in the UAE. 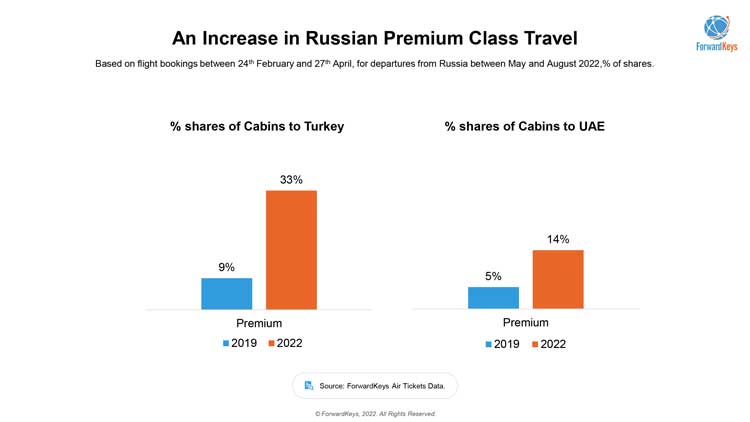 Changes to flight schedules, following Russian hostilities in Ukraine, have been as follows:

•           24th Feb: Air space in southern Russia was closed and Aeroflot was banned from flying to the UK

Olivier Ponti, VP Insights, ForwardKeys, said: “The war with Ukraine, and the consequent sanctions on flying, have effectively caused Russia’s outbound tourism market to dry up. Those people who are still flying comprise a small, affluent niche, who are forced to holiday in Asia and the Middle East rather than in Europe, which is their favourite destination in normal times.”

After stronger than expected recovery in 2022, this year could see international tourist arrivals return to pre-pandemic levels in Europe...