by The FINANCIAL
in Russian Invasion of Ukraine, Ukraine
0

Homes for Ukraine: record your interest

Max Hunder in KYIV, June 20 (Reuters) – Ukraine’s President Volodymyr Zelenskiy predicted Russia will escalate its attacks this week as European Union leaders consider whether to back his country’s bid to join the bloc and Russia presses its campaign to win control of east Ukraine.

“Obviously, this week we should expect from Russia an intensification of its hostile activities,” Zelenskiy said in a Sunday nightly video address. “We are preparing. We are ready.”

Ukraine applied to join the EU four days after Russian troops poured across its border in February. The EU’s executive, the European Commission, on Friday recommended that Ukraine receive candidate status. read more

Leaders of the 27-nation union will consider the question at a summit on Thursday and Friday and are expected to endorse Ukraine’s application despite misgivings from some member states. The process could take many years to complete.

The EU’s embrace of Ukraine would interfere with one of Russian President Vladimir Putin’s stated goals when he ordered his troops into Ukraine: to keep Moscow’s southern neighbour out of the West’s sphere of influence.

Putin on Friday said Russia had “nothing against” Ukraine’s EU membership, but a Kremlin spokesperson said Russia was closely following Kyiv’s bid especially in light of increased defence cooperation among EU members.

On the battlefield, Russian forces are trying to take complete control of the eastern Donbas region, parts of which were already held by Russian-backed separatists before the Feb. 24 invasion.

A prime target of Russia’s eastern assault is the industrial city of Sievierodonetsk. Russia said on Sunday it had seized Metyolkine, a village on the outskirts, and Russian state news agency TASS reported that many Ukrainian fighters had surrendered there. Ukraine’s military said Russia had “partial success” in the area.

Luhansk Governor Serhiy Gaidai told Ukrainian television that a Russian attack on Toshkivka, 35 km (20 miles) south of Sievierodonetsk, also “had a degree of success”. TASS, citing an aide to the interior minister of the Luhansk People’s Republic, reported Toshkivka had been “liberated”.

In Sievierodonetsk itself, a city of 100,000 before the war, mayor Olekander Struk said Russian forces controlled about two-thirds of the city, including most residential areas, and it kept throwing forces at the Ukrainians in an attempt to take over completely.

“I hope that the city will hold and, once it has the advantage in firepower, we will be able to liberate it without leaving it first.”

Both Russia and Ukraine have continued heavy bombardment around Sievierodonetsk “with little change to the front line”, Britain’s Ministry of Defence said on Sunday.

In Sievierodonetsk’s twin city of Lysychansk, residential and administrative buildings had been destroyed by Russian shelling, Gaidai said. “People are dying on the streets and in bomb shelters,” he said. 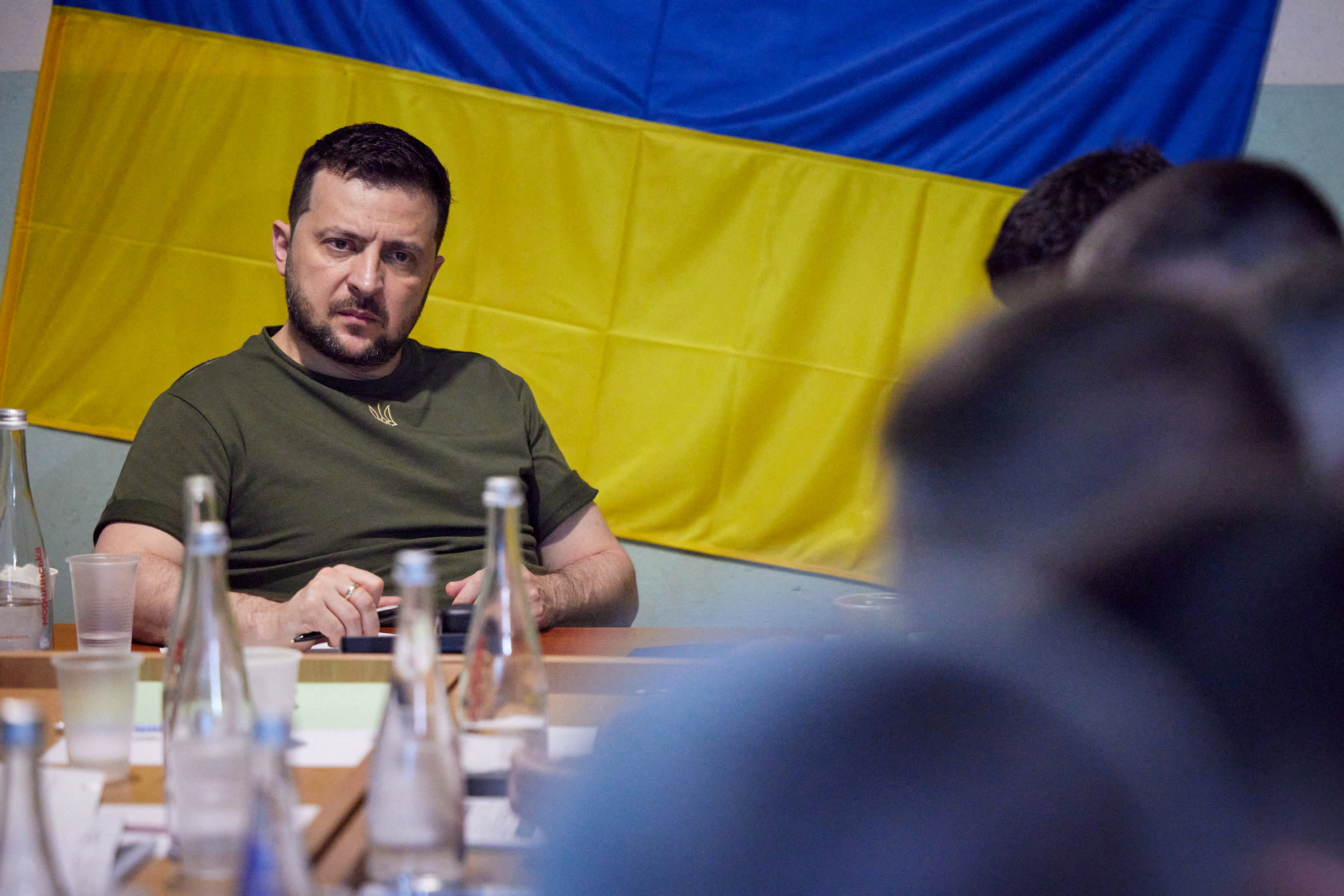 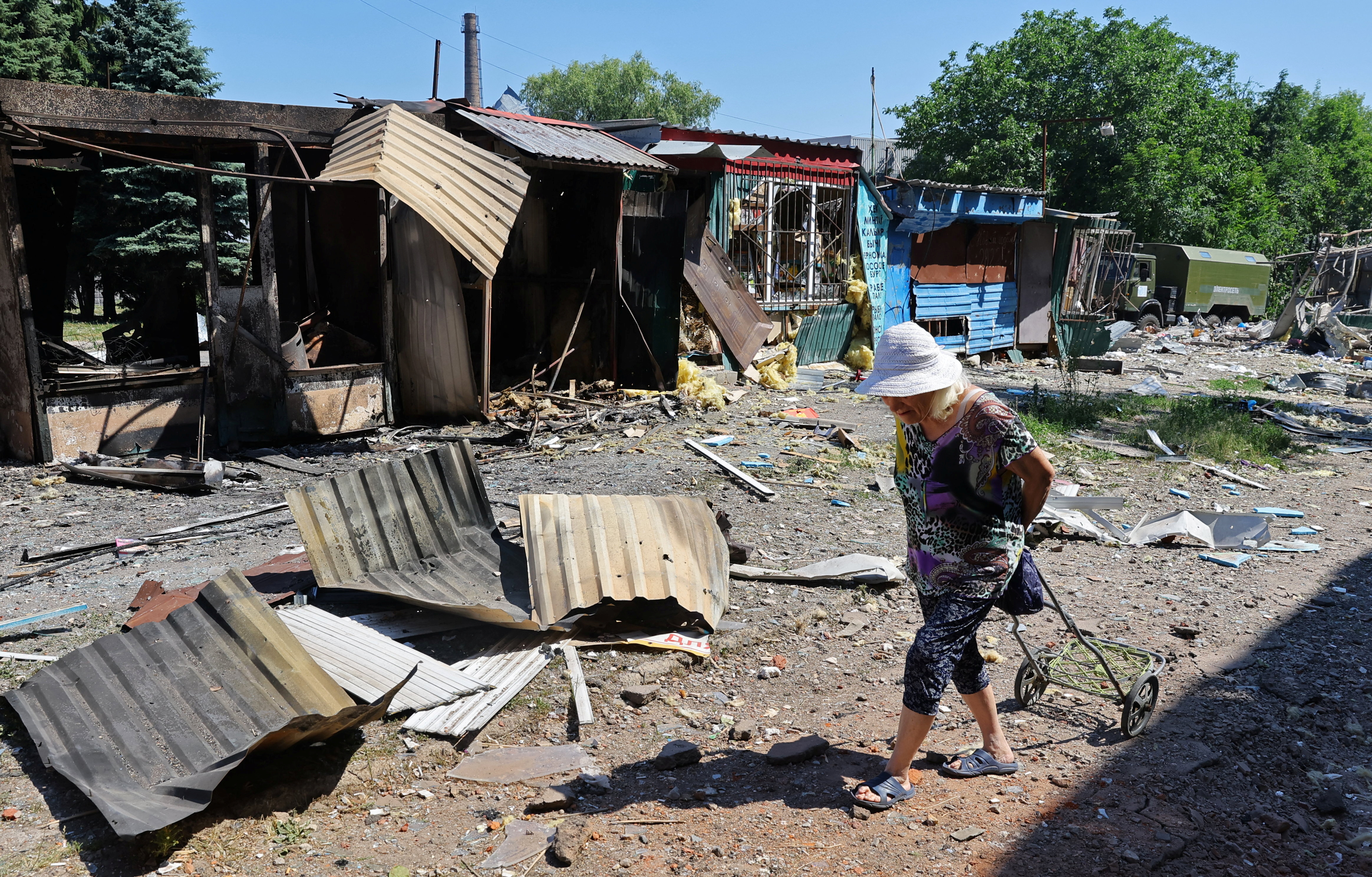 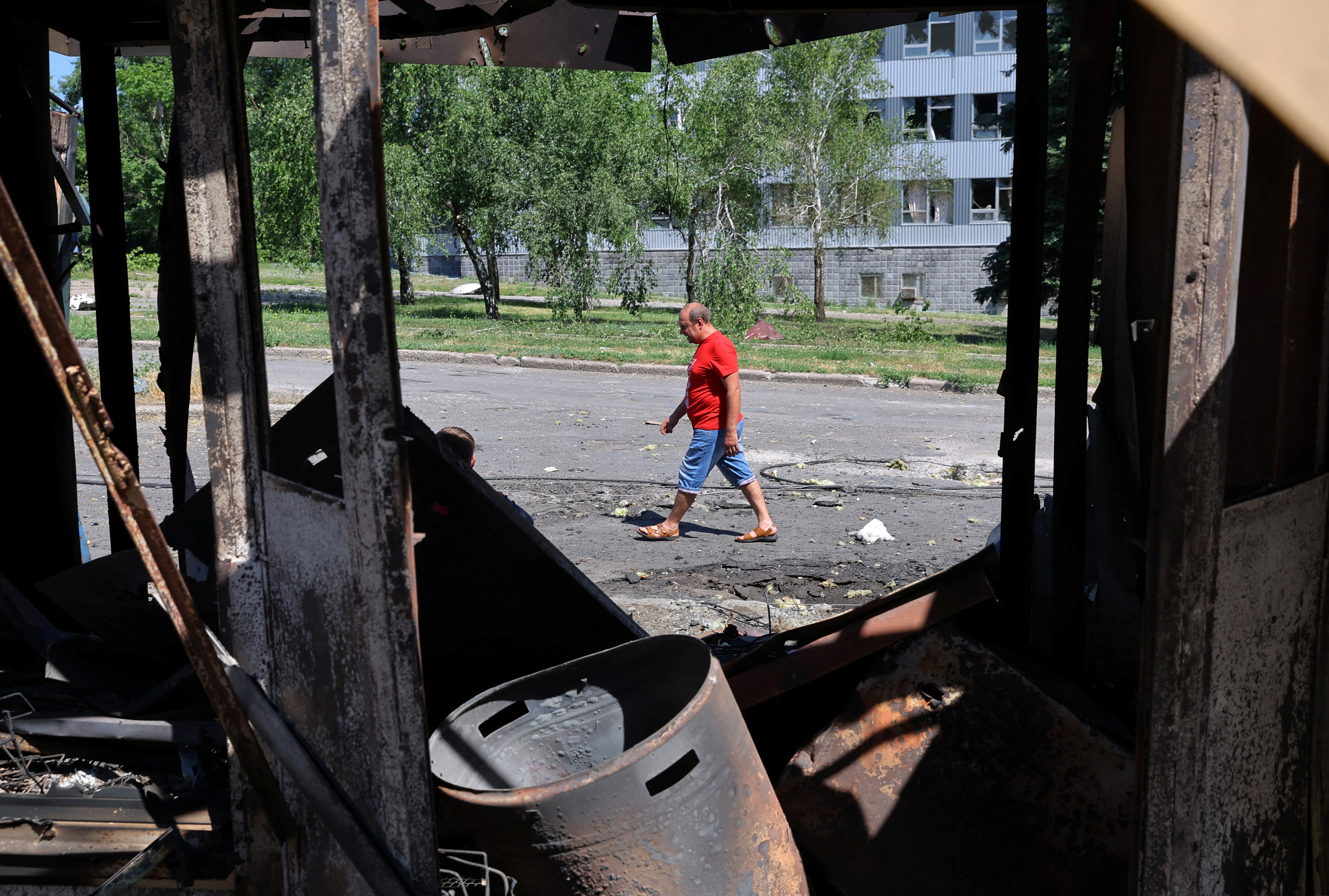 A woman walks past destroyed structures at a local market following recent shelling in the course of Ukraine-Russia conflict in Donetsk, Ukraine June 19, 2022. REUTERS/Alexander Ermochenko

Reuters could not independently confirm the battlefield accounts.

Analysts at the Institute for the Study of War, a Washington-based think tank, wrote in a note that “Russian forces will likely be able to seize Sievierodonetsk in the coming weeks, but at the cost of concentrating most of their available forces in this small area”.

“We must prepare for the fact that it could take years. We must not let up in supporting Ukraine,” Stoltenberg was quoted as saying.

Russia has said it launched what it calls a “special military operation” to disarm its neighbour and protect Russian speakers there from dangerous nationalists.

Ukraine and its allies dismiss that as a baseless pretext for a war of aggression.

Russian forces were trying to approach Kharkiv, which experienced intense shelling earlier in the war, and turn it into a “front-line city”, a Ukrainian interior ministry official said. read more

The governor of Russia’s Bryansk region said the border village of Suzemka had been shelled from northern Ukraine, and one person was wounded and a power station was damaged.

Ukraine’s general staff said Russia had deployed an anti-aircraft missile division in Bryansk and had up to three battalion tactical groups were covering the border in the Bryansk and neighbouring Kursk regions.

Towards Kharkiv, the Russians were trying to stop Ukrainian forces from advancing to the border, it added.

In southern Ukraine, Western weaponry had helped Ukrainian forces advance 10 km (6 miles) towards Russian-occupied Melitopol, its mayor said in a video posted on Telegram from outside the city.

Australia’s defence ministry said it had sent the first four of 14 promised armoured personnel carriers to Ukraine, part of a $200 million aid pledge.

As the war in Ukraine nears the one-year mark, nearly two-thirds (64%) of adults across 28 countries still report closely...

Homes for Ukraine: record your interest