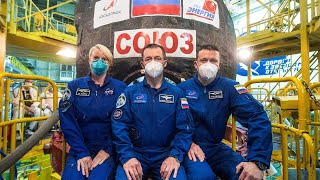 The FINANCIAL --  An American astronaut and two Russian cosmonauts have launched to the International Space Station just ahead of and to extend 20 years of a continuous human presence in Earth orbit.

Kate Rubins of NASA, together with Sergey Ryzhikov and Sergey Kud-Sverchkov of Roscosmos, lifted off on Russia's Soyuz MS-17 spacecraft from the Baikonur Cosmodrome in Kazakhstan on Wednesday (Oct. 14). Their launch, atop a Soyuz-2.1a rocket, began at 1:45 a.m. EDT (0545 GMT; 10:45 a.m. local Kazakh time).

The three crewmates are scheduled to dock their Soyuz at the station's Rassvet module at 4:52 a.m. EDT (0852 GMT) after a two-orbit rendezvous. This mission marks the first crewed use of an "ultrafast" flight plan, which will see the Soyuz arrive at the space station within three hours of its launch, rather than following an earlier expedited six-hour track or two-day path.

"This two-orbit rendezvous has been modeled for quite awhile now. It has been tested with Progress [cargo] vehicles," Ryzhikov said in a pre-launch press conference on Tuesday. "We will be reaching the station a lot sooner than we have reached Baikonur coming out from Moscow."
Soyuz MS-17 crew launch. Click to enlarge and view video in new, pop-up window. (NASA)

Rubins, Ryzhikov and Kud-Sverchkov's launch came two and a half weeks before the 20-year anniversary of the space station's first crew taking up residency on the orbital complex. The Expedition 1 crew, also comprised by an American and two Russians — William Shepard, Yuri Lonchakov and Sergei Krikalev — began their stay on Nov. 2, 2000.

"The 20-year anniversary of a continuous human presence in space is going to be quite an event and I think all three of us look forward to being there during that time," said Rubins. "I think the International Space Station is one of the most incredible engineering achievements in human history and certainly it ranks very high on spaceflight achievements. It is quite a marvel to see such a giant machine that was built entirely by humans and flown off the surface of Earth still persists in space 20 years later."

On board the space station since April, awaiting Rubins, Ryzhikov and Kud-Sverchkov, are Expedition 63 commander Chris Cassidy of NASA and Roscosmos flight engineers Anatoli Ivanishin and Ivan Vagner. The six crew members will serve together for seven days before Cassidy, Ivanishin and Vagner return to Earth on Soyuz MS-16, leaving Rubins, Ryzhikov and Kud-Sverchkov to begin Expedition 64.

Expedition 64, under Ryzhikov's command, will be a three-person complement until the launch of SpaceX's Crew-1 mission with four astronauts. Michael Hopkins, Victor Glover and Shannon Walker of NASA and Japan Aerospace Exploration Agency (JAXA) astronaut Soichi Noguchi are targeted to lift off on a Dragon spacecraft by mid-November, pending the resolution of an engine issue that led to the abort of a SpaceX launch on Oct. 2.

During their six-month mission, Rubins, Ryzhikov and Kud-Sverchkov will conduct hundreds of science experiments and technology demonstrations in a diverse field of disciplines, including biology, biotechnology, physical and Earth science.

"We are planning to try some really interesting things like bio-printing tissues and growing cells in space, and, of course, continuing our work on sequencing DNA," said Rubins, who in 2016 became the first astronaut to sequence DNA in space.

The three station residents will also oversee the arrival of several resupply spacecraft, including Progress vehicles, the first of SpaceX's second-generation Dragon cargo capsules and a Northrop Grumman Cygnus spacecraft. The three may also be on the station for the first docking by a Boeing CST-100 Starliner spacecraft on an uncrewed orbital flight test, which is targeted for early 2021.

Ryzhikov and Kud-Sverchkov are slated to perform spacewalks to prepare for the jettison of the Russian Pirs docking compartment and the addition of the Nauka ("Science") multipurpose laboratory module. The Pirs module was first added to the space station in 2001.

For Rubins, a microbiologist who lived on the space station for 115 days in 2016, Wednesday's launch marked a personal milestone: her 42nd birthday.

"I feel like this will be a birthday I will never be able to beat. It is pretty funny to launch to space on your birthday," Rubins said in an interview with collectSPACE. She is now the fifth U.S. astronaut to have launched on her birthday after Richard Truly on STS-2 in 1981, Dale Gardner on STS-51A in 1984, Kent Rominger on STS-85 in 1997 and John Phillips on Soyuz TMA-6 in 2005.

Ryzhikov, a 46-year-old Russian Air Force pilot, is also on his second spaceflight, having previously served with Rubins on Expedition 49 in 2016. Kud-Sverchkov, a 37-year-old aerospace engineer, is on his first mission.