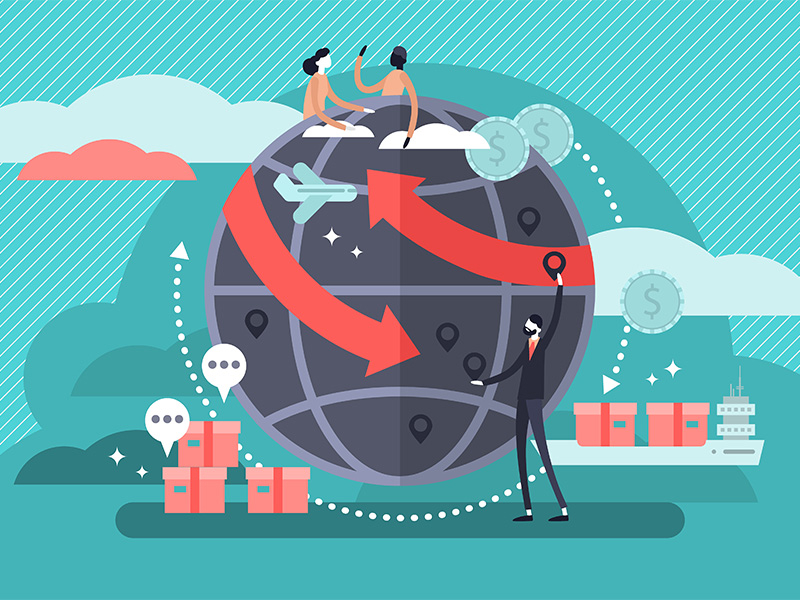 The implications of globalization for the global economy
Share This

The attitude to the globalization of both specialists and all the citizens is very ambiguous, and sometimes diametrically opposite. This is due to different points of view on the consequences of globalization processes, in which some see a serious threat to the global economic system. In contrast, others see a means of further economic progress.

Undoubtedly, the consequences of globalization can be both positive and negative, but there is no alternative to it, and therefore the main attention in the article is devoted to the study of the process of globalization.

Globalization as the highest stage of internationalization of the world economy

Economic integration fully fits into the process of globalization, making up its core, and globalization itself represents a higher stage of internationalization, its further development when long accumulating quantitative changes have led to a quantum leap. The world is becoming a single market for most TNCs, and, besides, most regions are open to their activities.

Globalization has become the most important real characteristic of the modern world system, one of the most influential forces that determine the course of development of our planet. According to the prevailing point of view on globalization, not a single action, not a single process in society can be considered limitedly only as such. The globalization of international relations is the strengthening of the interdependence and mutual influence of various spheres of public life and activities in the field of international relations. It affects almost all spheres of public life, including economics, politics, ideology, the social sphere, culture, ecology, security, lifestyle, as well as the very conditions of human existence.

At the macroeconomic level, globalization is manifested in the desire of states and integration associations for economic activity outside their borders through trade liberalization, removal of trade and investment barriers, creation of free trade zones, etc. Also, the processes of globalization and integration cover interstate coordinated measures for the targeted formation of the global economic market space in large regions of the world.

At the microeconomic level, globalization is manifested in the expansion of companies beyond the domestic market. Most of the largest multinational corporations have to operate on a global scale: any high-consumption area becomes their market, they must be able to satisfy consumer demand everywhere, regardless of borders and nationality. Companies think in global categories of customers, technologies, costs, supplies, strategic alliances and competitors. Various links and stages of design, production and marketing of products are located in different countries, unifying on an international scale. The creation and development of multinational firms allow you to circumvent many barriers.

Given that for TNCs (especially multinational and global), foreign economic activity in most cases is more important than internal operations, they are the main subject of globalization processes. Transnational corporations are the foundation of globalization, its main driving force.

An urgent need is the formation of a single global world economic, legal, informational, cultural space for free and effective entrepreneurial activity of all business entities, the creation of a single planetary market for goods and services, capital, labour, economic rapprochement and the unification of individual countries into a single world economic complex.

As we have already noted, the processes of globalization in the global economy are perceived and evaluated differently. But in different ways, they include not only individual scientists, specialists, and experts, but also residents of different countries. Globalization processes are most often welcomed in developed countries and raise serious concerns in the developing world. This is because the benefits of globalization are not evenly distributed. Therefore, one of the main questions causing the most heated debate is: who benefits from globalization?

Consequently, the degree of the positive influence of globalization processes on the economies of individual countries depends on the place they occupy in the global economy; in fact, the main part of the benefits is gained by rich countries or individuals.

Author: Natalia Revishvili
About author: Natalia Revishvili is a professional financial content writer and editor with an extensive experience in technical analysis and the Forex market. Over the past few years, she has been successfully trading on Forex using the trends, support, resistance and technical formations. Now Natalia, apart from trading Forex for living and being technical analysts for financial websites, is a happy owner of two dogs traveling round the world.
Markets covid-19 Globalization